1. Design a prototype of a persuasive technology that aims to encourage prosocial attitude or behavior change.

2. Identify the persuasive theories that are most applicable to generate such outcomes.

3. Rely on extensive testing with a variety of users and follow a human-centered design process.

Since the pandemic, educational institutions have seen a substantial increase in video conferencing. Despite its benefits in keeping these institutions in motion, digital-only meeting spaces have directly led to more isolation, anxiety, and depression among students.

In Zoom Exhaustion & Fatigue Scale1, Fauville et al. notes that the absence of nonverbal communication on video calls contributes to exhaustion, because students often compensate for the richness of in-person communication by feeling the need to present exaggerated personality traits. Another contributing factor has been the self-facing camera feed, in which students find themselves constantly self-checking that they are presenting their best image during meetings.

Our intervention uses two persuasive techniques. The first involves distancing through the application of a filter that changes the users’ image into a cartoon version of themselves. This layer lets the user observe their facial expressions without calling attention to any specific feature that might raise self-consciousness. The second technique is self-affirmation, an intervention through which users are reminded about their core personal values as a means to weaken any implications of threat towards personal integrity.

How Graduate Students Felt About Avatars

In the first round of testing, we gauged how graduate students felt about avatars in an online learning environment. We conducted the test by simulating a Zoom class, in which an experimental group of participants were asked to install Snapchat’s Snap Camera application and apply the cartoon style filter to their video feed before joining the call. Another group without avatars functioned as a control.

For both groups we provoked feelings of embarrassment by intermixing, one intimate question drawn from the 36 Questions That Lead to Love (Jones) at the beginning of the class as well as two normal icebreaker questions. Participants then listened to the lecture, during which two research members feigned an awkward moment by talking and playing sounds without realizing that their microphone was unmuted.

Finally, participants were asked to complete a survey pertaining to the “teaching environment style”, which was actually used to evaluate their feelings about the simulated class. This survey consisted of one section that probed participants about their moods during the lecture and another that evaluated their self-esteem via the Rosenberg Self-Esteem Scale.

Mixed Feelings About the Use of Avatars

The results of the experiment demonstrated that within the experimental group there were mixed feelings about the use of avatars. Some testees expressed that avatars encouraged them to keep their camera on and remain engaged, while others felt that the avatar was unrepresentative of their real appearance. However, all control group testees admitted to checking their own microphone and video feed after the staged awkward moments.

Meanwhile, the quantitative results from the survey synthesis validated the hypothesis that avatars could positively reduce self-consciousness on video calls. We found that the experimental group felt more active, enthusiastic, and lively whereas the control group felt more irritable, tired, and shy.

“I feel active, enthusiastic, and lively.” 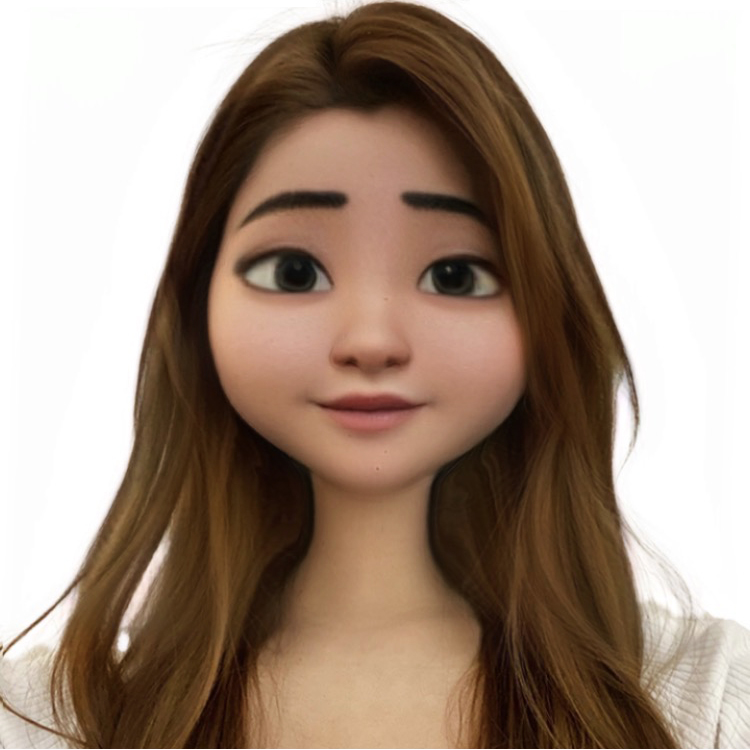 “I feel irritable, tired, and shy.” 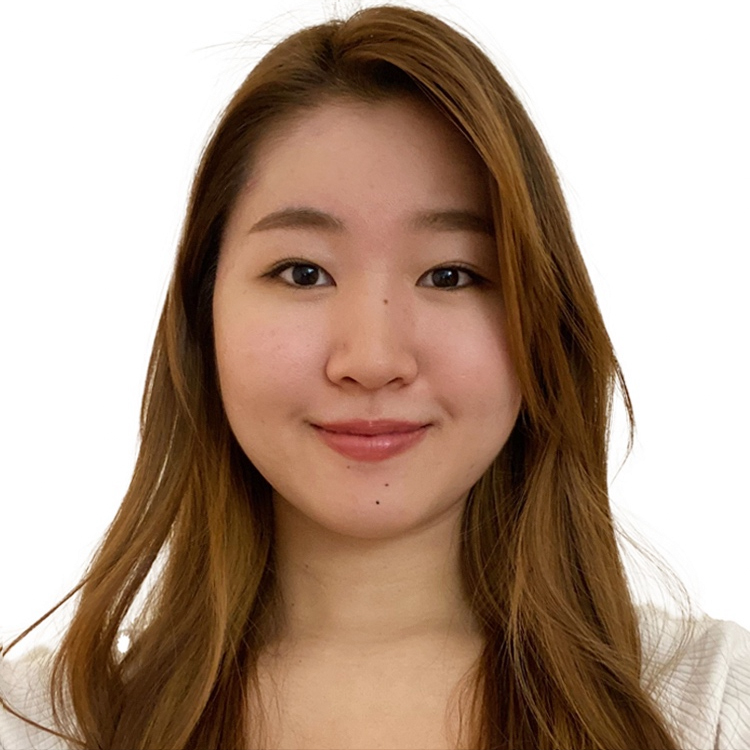 Self-Affirmation Through the Use of Visual Props

In the second round of testing we evaluated how graduate students would react to a Zoom experience that self-affirmed their own values through the use of visual props. 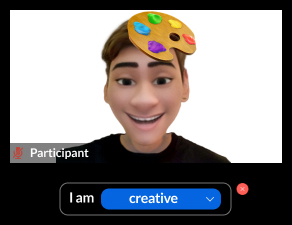 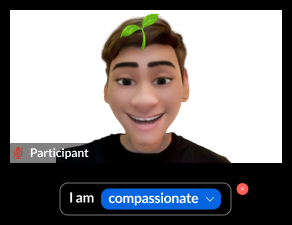 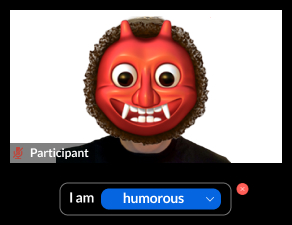 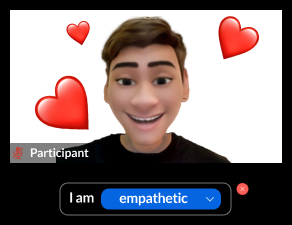 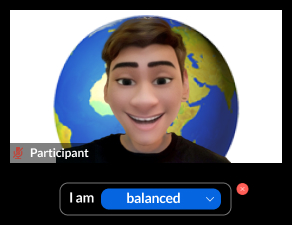 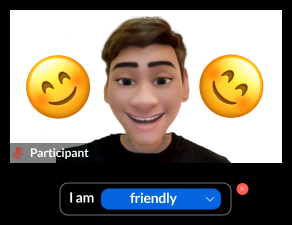 Publicly-Displayed Props May Be Too Explicit

The results showed that some of our participants consider virtual classrooms to be professional settings, which meant that linking a personal value with publicly-displayed props may not only be too explicit, but might even cause distress during video conferences.

Revisiting the Flow of Joining a Meeting

After coming up with the above, we revisited the flow of joining a virtual meeting via Zoom and looked for gaps where design interventions might be integrated more discreetly.

Opportunities Along the Stream

We then noticed that the appropriate moment to introduce the avatar filter to our audience would be when a window pops-up previewing the attendee’s video before a meeting is opened. Once attendees pick the “Join with video” option, a loading window appears, thus soliciting another opportunity to embed a self-affirming message into the stream.

As previously tested, when students are in a meeting the avatar filter implicitly persuades them to keep their cameras on by mitigating self-consciousness.

Finally, when the meeting is over, we planned to deliver a private activity report that includes an image of our users wearing an emoji prop that is associated with one of their values as an opportunity to reinforce the message.

Avatars Make It Easier for Users to Empathize with Others

For the purpose of isolating the outcomes generated by the new Zoom experience, we set up a control group where we did not apply any of the treatments from the experiment to the testees. This group confirmed feeling uneasy by having their cameras on.

In regards to the self-affirmation messages embedded into the flow, the group did not indicate a conscious relationship between their selected values, the emoji animations, or the avatar props. We wonder if these might have had a more pronounced impact at a subconscious level and are interested to further investigate its efficacy if we were to continue working on this project.

“If I did not know them I would have kept my camera off.” 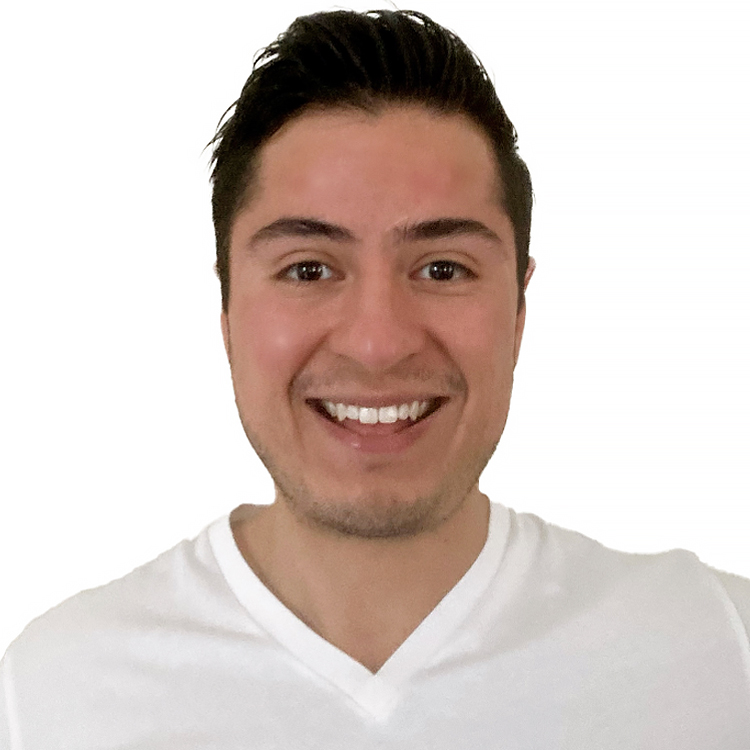 “I felt connected to them even though we were not talking." 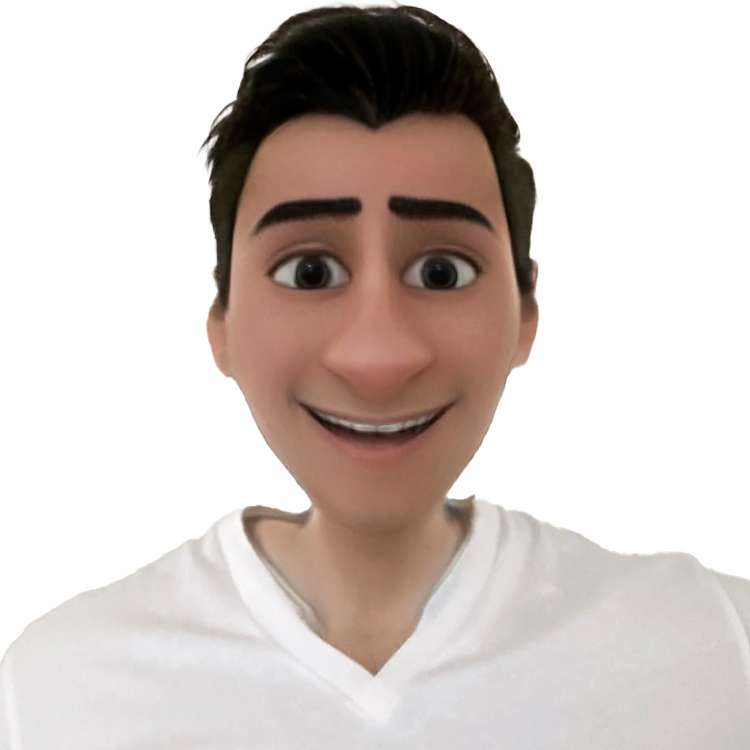 About two years into the COVID-19 pandemic, we wanted to address an issue that felt relevant to us as graduate students and decided to focus on self-consciousness as a contributing factor for Zoom Fatigue.

‍Through expert interviews and literature reviews, we identified distancing and self-affirmation as plausible techniques to counter the problem. And based on our small-scale studies we learned that explicit inducements trigger psychological defense in users, whereas embedded or stealthy approaches tend to be more effective.

‍Our experiments also showed initial insights that there could be a positive link between avatar use and decreasing self-consciousness. However, if we were to implement this solution, we would want to repeat the experiments with larger sample sizes and more diverse graduate student populations, particularly for different subsets (i.e. different genders, races or socio-economic breakdowns).

If you are intrigued and want to learn more about this project, you can check the full academic paper and bibliography by clicking here.